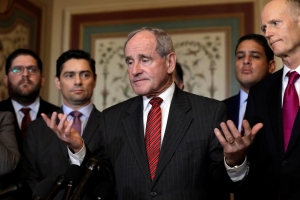 The Republican chairman of the U.S. Senate Foreign Relations Committee said on Thursday he did not want lawmakers to pass legislation imposing sanctions on Turkey for now, to lessen friction during talks over Turkey’s purchase of a Russian missile defence system.

“Probably it’s best we don’t pass a sanctions bill at this moment,” Senator Jim Risch said during a meeting with reporters in his office.

Risch was among a group of Republican senators President Donald Trump called to the White House on Wednesday for a meeting with Turkish President Tayyip Erdogan in which Trump urged Erdogan to abandon the Russian S-400 systems that began arriving in Turkey in July, despite threats of sanctions from Washington.

Frustrated with Turkey’s offensive in northern Syria and the S-400 purchase, different groups of lawmakers – including Risch and Senator Bob Menendez, the top Foreign Relations Democrat, introduced legislation that would impose stiff sanctions on Ankara.

Risch commented that the United States does not want to undermine that relationship, but that the weapons sale cannot go ahead.

In response to Turkey’s purchase of the Russian system, Washington removed it from a multinational programme to produce the F-35 fighter jet and banned sales to the NATO ally. Ankara could also be subject to sanctions under existing U.S. law.

Some members of Congress had wanted Trump not to give Erdogan the honour of a White House meeting, but Risch said he was glad it had taken place. He said it was “therapeutic” and that the Turkish leader had left with a “very, very clear picture” that Turkey would face consequences if it went ahead with the S-400 purchase.