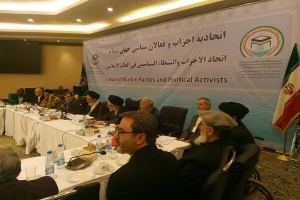 The Muslim parties and political activists attending the 33rd Islamic Unity Conference in Tehran called for bringing US to justice for backing the terrorist ISIL group.

The Union of Muslim Parties and Political Activists as part of the 33rd International Islamic Unity Conference ended its conference in Tehran on Wednesday afternoon with issuing a final statement.

In the final statement, Muslim parties and political activists called on the Tehran-based World Forum for Proximity of Islamic Schools of Thought to sue Washington in international courts for creating and supporting ISIL terror group, its support for the criminal Zionist regime of Israel against Palestinian people, as well as its support for Saudi crimes against the Yemeni nation.

The signatories of the statement further emphasized promoting the thought of the link between religion and politics and stated their support for the Axis of Resistance and Palestine as their main strategy.

The statement, furthermore, declared Jerusalem as the eternal capital of Palestine as an unalterable strategy.

A large number of Islamic scholars and political activists took part in the 33rd International Islamic Unity Conference, which is underway in Tehran’s Azadi Hotel.