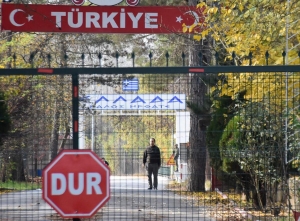 Turkish Interior Minister Suleyman Soylu said on Wednesday that Germany and the Netherlands had agreed to take back German and Dutch Islamic State detainees and their families from Turkey, after Ankara started to repatriate the fighters this week.

On Monday, Turkey said it had deported two of the detainees, a German and an American, and added that it will deport another 23 European nationals in the coming days.

Turkey holds hundreds of Islamic State suspects in its jails and says it has captured another 287 during its military offensive in northeast Syria against Kurdish YPG fighters – an incursion which has further strained ties with its NATO allies.

“We have our own policy and we are implementing it without compromise. Those who want to step out of our way will, but those who don’t will face the consequences,” Soylu said in the southeastern province of Van on Wednesday.

“I would like to especially thank two countries here. One is Germany and the other the Netherlands,” he added. “As of last night, they have confirmed that they will take back terrorists from Daesh (Islamic State) who are citizens of their countries and their wives, children and all the others,” he said.

Turkey has said it will deport the detainees to Ireland, Germany, France and Denmark.

French Interior Minister Christophe Castaner said on Tuesday that France would take back 11 suspected Islamic State members from Turkey. Ireland’s Foreign Minister Simon Coveney also said that two Irish nationals set to be deported from Turkey had the right to return to Ireland.

On Monday, Greek police said that Turkish police came to the border post at the Greek town of Kasanies and requested that one of the detainees, a U.S. citizen of Arab descent, be admitted to Greece as he had been arrested for exceeding his stay in Turkey.

Greek police said that a check carried out in a database of Greek and cooperating countries did not find anything against him, and that the man has been refused entry to Greece and sent back to Turkey. Turkish state media said on Wednesday he was in the buffer zone between Turkey and Greece.

Turkey’s offensive against the YPG, U.S. partners in the battle against Islamic State in Syria, prompted concern that the detained Islamic State militants could break out and regroup amid the chaos.

Washington says that nearly all the 10,000 Islamic State suspects held by the SDF in Syria remain in captivity, but a senior U.S. State Department official described them on Tuesday as a “ticking time-bomb” and urged states to take back their citizens.