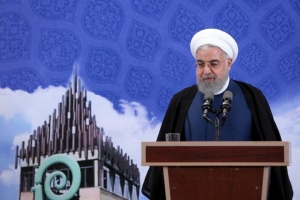 Iranian President Hassan Rouhani announced on Monday that continuation of implementation of the Joint Comprehensive Plan of Action will lead to the lifting of the weapons embargo against Iran in 2020.

President Rouhani made the announcement in his address to a large crowd in Kerman province, southern Iran, on Monday morning.

By continuing implementation of the Joint Comprehensive Plan of Action, “we’ll achieve an economic-security goal in the next year,” the president stressed.

Such achievement is an important outcome gained from the JCPOA, Rouhani added.

Despite the world criticism, US President Donald Trump withdrew unilaterally from the Iran Deal- JCPOA- in May 2018.

To respond reciprocally to the US move, Tehran decided to reduce its commitments to the JCPOA, based on Article 26 and 36, and set a deadline for Europeans to remedy breaches on the first anniversary of the US withdrawal in May 2019.