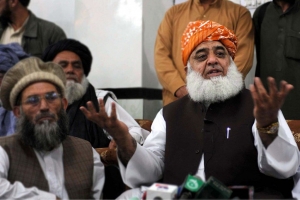 As major opposition parties in Pakistan are flexing muscles to hold anti-government protest, the authorities in the country have prepared themselves to tackle the opposition move.

He already had warned the government against creating hurdles in the way of the “Azad March” and said that the march will be peaceful.

There are reports that the Pakistan Peoples Party (PPP) a major opposition political party inside and outside the parliament is pushing JUI to postpone its protest march to oust Khan’s Pakistan Tehreek-e Insaf (PTI) from power.

Weeks before JUI leader Maulana Fazlur Rehman is expected to flood Islamabad with hundreds of thousands of supporters, PPP leaders are reportedly urging him to delay his protest until November.

With a protest dubbed Rehman is hoping to muster enough support to lock down the capital in the mild fall weather in a bid to force Khan from power.

Meanwhile, in a major development, the Pakistan Muslim League-Nawaz (PML-N) has decided that they will join the ‘Azadi March’ whether it remains a rally or turns into a sit-in against the government.

Local media reported that the decision was taken at a meeting of senior leaders of the PML-N, which was presided over by party president Shahbaz Sharif, a couple of days before his expected meeting with JUI-F chief Maulana Fazlur Rehman to finalize and jointly announce the strategy.

Shahbaz asked the party leaders at the meeting to mobilize workers in the light of party supremo Nawaz Sharif’s instructions to fully participate in the ‘Azadi March’ of the Maulana on Oct 31.

Earlier Nawaz Sharif has also in his letter [written from jail] to Shahbaz Sharif called for a joint strategy in consultation with the Maulana on the protest plan leaving the option of the sit-in open as per the situation.

The government also gets into action amid rising political temperatures, kicked off its consultative process in an attempt to deal with the JUI-F’s anti-government march on Islamabad.

“We will also protest in Punjab, Khyber Pakhtunkhwa (K-P) and Azad Kashmir. We know how to fight puppets and election rigging,” Bilawal said while addressing a gathering.

Bilawal said the government caused a Tsunami of inflation and imposed innumerable taxes. According to him, the PTI government is depriving people of their livelihood through its anti-people budget.