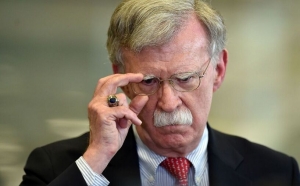 What has been expected for months, ultimately took place: US President Donald Trump has fired his national security advisor John Bolton, and Trump did it in his favorite style.

The US president abruptly announced in a tweet Tuesday that he has asked Bolton to resign, noting that he “strongly disagreed with many” of Bolton’s suggestions “as did others in the administration.”

“I thank John very much for his service. I will be naming a new National Security Advisor next week,” Trump wrote.

The tweet came just an hour after the White House press office said Bolton was scheduled to appear at a Tuesday press briefing alongside Secretary of State Mike Pompeo and Treasury Secretary Steve Mnuchin.

Bolton, however, maintains that he offered to leave his post voluntarily, tweeting minutes after Trump’s announcement, “I offered to resign last night and President Trump said, ‘Let’s talk about it tomorrow.'”

Bolton reiterated the point that he offered to resign to Fox News Tuesday.

Trump said he will make a decision next week, but given the president’s unpredictable nature, sources warn that he could choose someone who is not under discussion right now. Reports say the White House is already discussing potential candidates to replace Bolton. There are at least 10 names being circulated and there does not appear to be a shortlist at this time.

Bolton, a leading foreign policy hawk and Trump’s third national security adviser, was the chief architect of Trump’s strident stance against Iran. He, who made his name as a belligerent member of George W. Bush’s State Department and a Fox News contributor, had not only demanded that the Trump administration withdraw from the nuclear deal, but also previously advocated bombing Iran. Bolton has spent the better part of a decade calling for the United States to help overthrow the government in Tehran. Two years ago, at a Paris gathering, Bolton told members of anti-Iran terrorist group, known as the Mujahedeen Khalq Organization (MKO), that the Trump administration should embrace their goal of immediate regime change in Iran and recognize their group as a “viable” alternative.

Bolton had also pressed the president not to let up pressure on North Korea despite diplomatic efforts. He had also advocated a tougher approach to Russia and, more recently, Afghanistan. He had opposed a State Department plan to sign an Afghan peace deal with the Taliban militant group, believing the group’s leaders could not be trusted. Among the points of contention was Trump’s intention – called off by the president at the last minute – to bring Taliban leaders to the Camp David presidential retreat last weekend to finalize an accord just days before the 18th anniversary of the Sept. 11, 2001 attacks.

US officials have said it was Bolton who was responsible for the collapse of a summit in February between Trump and North Korean leader Kim Jong-un in Hanoi by recommending a list of hard-line demands that Kim rejected. North Korea media, in May, referred to Bolton as a “war maniac” who “fabricated various provocative policies such as the designation of our country as ‘axis of evil’, preemptive strike and regime change.”

In Washington’s community of foreign policy veterans, Bolton has been a super-hawk for decades, who was called by critics an ideologue and a warmonger who retaliates against dissenting views. Now, 14 months before the US presidential election, it seems Trump seeks changes to his foreign policy in order to compensate for his administration’s multiple failures to some extent.