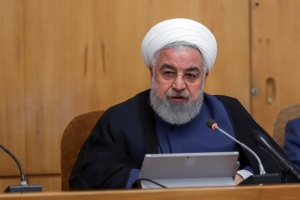 The aim of US measures in the region is nothing but to plunder the assets of Muslim countries, said President Rouhani, stressing that the Persian Gulf littoral states are capable of preserving the security of their own region.

In a cabinet meeting on Wednesday, President Hassan Rouhani said the US’ calls for forming a new coalition in the Persian Gulf and the Sea of Oman are “superficial” and “impractical”, adding “no doubt, no matter how much of these calls is put into practice, it will do nothing to help the security in the region.”

The US recently announced plans to form the coalition force to protect shipping in the Strait of Hormuz from what it calls an Iranian threat. The move comes amid Washington’s attempts to undermine Iran’s oil exports after Trump pulled the US out of the Iran nuclear deal and re-imposed sanctions on Tehran.

The US has officially asked Germany, Britain and France to participate in the coalition, a request that was declined by German Foreign Minister Heiko Maas. Japan has also refused to join the force, and France has expressed reservations. However, the UK and the Israeli regime said they would join the coalition.

Rouhani went on to add that “the Islamic Republic of Iran, alongside other Persian Gulf littoral states, is ready to guarantee the security in this region.”

“Regional countries, through unity and dialogue, can preserve their own security, and the US’ measures and claims won’t benefit them in the least,” Rouhani stressed.

The president then turned to the claim by the Israeli regime to join the US’ coalition in the Persian Gulf, saying “Israelis had better take care of the security of where they are if they can! Although, wherever they had a presence, they brought about nothing but insecurity, slaughter and terror. The main perpetrator of terrorism, war and slaughter in the region is the occupying regime of Israel.”

The president then cautioned regional countries against falling into the trap of these claims.

Elsewhere, Rouhani discussed the recent developments regarding the JCPOA, saying “we began reducing commitments to create a balance. At the same time, we are continuing our talks [with other signatories to the agreement.]”

“Under proper conditions, we are always in favor of interacting with the world and holding talks with the other side to reach our goals.”

Rouhani went on to add, “if we fail to achieve results by the end of the second 60-day deadline, we will definitely start the third phase. We will then give another 60 days to reach a correct, balanced and logical solution.”

“We believe in commitment for commitment,” he stressed.