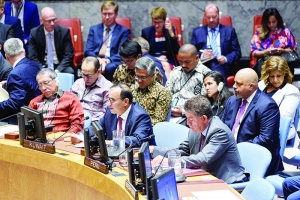 The State of Kuwait has urged all parties to abide by and respect their obligations under International Humanitarian Law (IHL).

This came in a speech by Kuwait’s Permanent Representative to the United Nations Ambassador Mansour Al-Otaibi at a UN Security Council meeting held on Tuesday evening on the promotion and encouragement of respect for IHL.

The year 2019 marks the 70th anniversary of the 1949 Geneva Conventions, which resulted in the most devastating war in humanity, the Second World War (WW2), where the UN was founded as a result of its effects and losses and to prevent another devastating war, he said.

He said that strengthening the rule of law, especially IHL, is highly vital, noting that the Four Geneva Conventions and their Additional Protocols provide the legal framework for the protection of human beings during wars and armed conflicts.

The world is still witnessing neglect and flagrant disregard for the implementation of the provisions of these agreements in recent times, Al-Otaibi warned, reviewing examples of disregard, such as what is happening in the occupied Palestinian territories, Syria and the Rohingya minority in Myanmar.

The Kuwaiti diplomat stated that the fundamental answer is by strengthening the rule of law and respecting humanitarian principles during armed conflict, but he wondered how it is achieved.

He noted that the Security Council has a vital and pivotal role in ensuring compliance with IHL and strengthening the rule of law by ensuring the full implementation of relevant Security Council resolutions, particularly in the context of the protection of civilians and compliance by parties to the conflict and international organizations operating in the field.

Al-Otaibi underlined the responsibility of the UN peacekeeping forces to protect civilians within their mandate, providing security for the camps of the displaced, medical evacuation of the wounded and strengthening the capabilities of the national police to carry out responsibilities. He also stressed ensuring accountability for war crimes, genocide and crimes against humanity, guaranteeing that those responsible for targeting civilians will be held accountable.

Sanctions could play an important role in ensuring that those responsible for violations of IHL and international human rights law are held accountable if used in an effective manner, he said, adding that member states should apply the existing international laws more fully through specific practical and operational measures, while no one can deny different national priorities and policies.

It is often difficult to coordinate all positions uniformly but this should not in any way affect obligations and responsibilities under international law, especially in the humanitarian field, the provision of humanitarian assistance and allowing unhindered access to the needy, he said.

The Kuwaiti diplomat reaffirmed that it was essential that the veto not be used to block international humanitarian aid convoys from accessing the needy. He also noted the possibility of redoubling efforts at the bilateral level, especially through the exchange of experiences and best practices between countries.