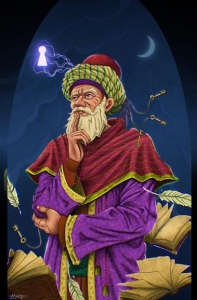 of dreams who lived in the 8th century. He was a contemporary of Anas ibn Malik.

According to Yehia Gouda‘s most authoritative encyclopedic reference book on Muslim oneiromancy Dreams and Their Meanings in the Old Arab Tradition (ISBN 0-533-08877-1, published in 1991), the legendary hazrat Abu Bakr Muhammad Ibn Sirin Al-Ansari (R.A.) (33-110 AH; AD 653–728), was, indeed, born in Basra, as mentioned, in AD 653, i.e., the 33rd year after Muhammad’s migration from Al-Makkah to the then Al-Madinatul Munawarah. His birth came two years before the end of the rule of Caliph Uthman ibn Affan.

Muhammad’s father (the name Abu Bakr was seldom used) was one of the many captives taken by the great Muslim warrior Khalid ibn Al-Walid when he embarked on his campaign to conquer Al-Sham (the area comprising Syria, Lebanon and Palestine), under the caliphate of Ómar ibn Al-Khattab (AD 583–684). He was a coppersmith from a town called Jirjaya, settled and working in a place called ‘Ain Al-Tamr, where a decisive battle took place in Hijra (migration) year 12. Certain historians contend that it was Abu Bakr’s mother, named Sireen, who had been taken captive. But, according to the Encyclopedia of Islam (London; Leiden & E.J. Brill, 1971), vol. 3, p. 947, Ibn Sirin’s mother, Safiyya – a slave of the caliph Abu Bakr – was held in such esteem within the community that when she died, her laying-out was performed by three of Muhammad’s wives and eighteen Badris(veterans of the battle of Badr), led by Ubay ibn Ka’b, were present at her burial. ‘Omar sent him as a present, either directly to Anas ibn Malik (one of the most authoritative sources on the life and opinions expressed by Muhammad) or first to a man called Talha Al-Bukhari (from Bukhara, Central Asia) who, in turn, gave him to Anas.

Sirin tried to convince Anas to set him free against a sum of money (mukataba). When the latter refused, Sirin complained to ‘Omar, who ordered that his wish be granted for 40,000 dinars, to be paid in installments.

Muhammad worked as an ambulant cloth merchant, or peddler, in Al-Basra. The fact that he was deaf or hard-of-hearing did not prevent him from becoming one of the most fabulous storytellers of his time about Muhammad (the Prophet), quoting such prominent personalities as Abu Hurayrah, ‘Abdullah ibn ‘Omar, and Anas ibn Malek.

Known as Ibn Sirin, Muhammad was one of the first ascetics of Al-Basra. He became the prime imam in religion and an erudite in the Qur’an. He was described by one of his contemporaries (Abu Ná’eem) as wise, heeding God and perspicacious, sharing food with his brethren and travelers, strongly interceding in favor of the lonely and those who were punished for one reason or another. He was alert, cautious, honest and properly maintaining whatever was entrusted to him. He used to weep at night and smile and rove around all day. And he fasted every other day. No one was as religious or as knowledgeable as him in his art. His family was so generous that they would not hesitate to offer to their visitor the last loaf of bread in their house. He used to savor and recite poetry.

He was particularly renowned for his extraordinary skill in interpreting dreams as attested by the Arabs’ greatest intellectuals, such as Al-Gaheth, Ibn Qutaybah and Ibn Khaldoun, who considered his work as crucial in this field.

This section needs additional citations for verification. Please help improve this article by adding citations to reliable sources. Unsourced material may be challenged and removed. (March 2015)

The most notable of the books attributed to him is Dreams and Interpretations. Ibn Al-Nadim says that he was the author of Taabirul Ro’oya (What Dreams Express), which is different from or an abridged version of Muntakhabul Kalam Fi Tafsir El Ahlam (A Concise Guide for the Interpretation of Dreams) first printed in Bulaq, Egypt, in 1284 AH, in Lucknow in AD 1874 and in Bombay in 1296 AH. It was subsequently reprinted numerous times in various parts of the Arab World under different titles.

But that book, allegedly written by Ibn Sirin, who died in 110 AH, comprises many discrepancies (anachronic passages). For instance, it tells a story about Imam Shafe’i who died in 204 AH. It also quotes Is’haq Ibrahim ibn ‘Abdullah Al-Kirmani, who died in 400 AH.

Nonetheless, some scholars are of the view that most if not all of the works related to Ibn Sirin might be apocryphal, or even misattributed to him completely. Another example lies in the authenticity of the book “Muntakhabul Kalam …” which is definitely non-genuine, for the simple reason that it relates those stories that happened long after Sirin’s death as already stated[citation needed]. Nevertheless, it is possible that these books were written by another expert or by Ibn Sirin’s students and/or admirers. The major suspect is a Muslim preacher by the name of Abu Sa’id Al-Wa’ez, himself author of several books on Islamic oneiromancy.

What lends credence and adds weight to the theory that Ibn Sirin never wrote anything is the established fact that he abhorred books. He always relied on his excellent memory and was of the view that it is books that led to the perdition and doom of past generations. Whenever he wanted to memorize a hadith (quotation of Muhammad), he wrote it down on a piece of paper which he destroyed as soon as he learned it by heart. One night, a friend begged him to keep in his house a book he was carrying, which he categorically refused by saying he had vowed that never “shall a book” spend a night at his home. Although he was known for correctly interpreting dreams, this book cannot be authentically traced back to him.

The rare second edition in Italian of his interpretation of Egyptian and Persian dreams was translated from Leo Toscano‘s Latin into Italian by the famous cheiromantist Patricio Tricasso, who, in his foreword to Alessandro Bicharia, explains that he has omitted many of the original interpretations owing to many dreams being inspired either by melancholy or evil spirits. The original Arabic, Greek and Toscano’s Latin texts seem not to have survived and this is the second of three Italian editions of the sixteenth century, the others appearing in 1525 and 1551 AD.

Made of dark rough stones laid in a