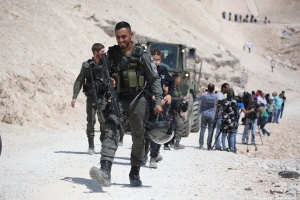 Security sources confirmed that a large Israeli military force escorted a bulldozer to Bir Ouna and cordoned the area off before they proceeded to demolish four barns and a residential room, owned by Mohammad Zreineh, purportedly for being built without a license.

Meanwhile, witnesses said that Israeli soldiers randomly opened fire at residents who attempted to counter the demolition, injuring Zreineh’s son with a rubber-coat bullet in the foot and beating other family members.

The sparsely-populated Bir Ouna neighborhood, classified as Area C, makes almost 30 percent of the area of Beit Jala and has been targeted by Israel for annexation for decades.

Israeli refuses to permit virtually any Palestinian construction in Area C, which constitutes 60 percent of the occupied West Bank and falls under full Israeli military rule, forcing residents to build without obtaining rarely-granted permits to provide shelters for their families.

In contrast, Israel much more easily gives the estimated 550,000 Jewish Israeli settlers there building permits and provides them with roads, electricity, water and sewage systems that remain inaccessible to many neighboring Palestinians.