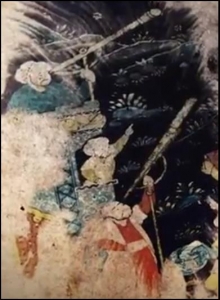 astronomer and mathematician. He was one of the many scholars employed in the court of the Abbasid caliph al Ma’mun (d. 833), under whom the House of Wisdom (Bayt al-Hikmah) flourished. It has been reported he produced both mathematical and astronomical treatises, though none have survived. Most of our knowledge of Sanad comes from multiple sources offering glimpses of the achievements of this polymath.

Sanad was well educated at an early age and was the son of a learned Jewish astronomer. He was said to have studied the Almagest written by Ptolomy, which is quite possible, as the Almagest was sell known by Sanad’s lifetime, and an Arabic translation of the work was produced in the very early ninth century in Baghdad. Around the age of twenty, Sanad came under the tutelage of al-Abbas ibn Said al-Jawhari (d. c. 860), a highly regarded mathematician and astronomer already operating in the court of al-Ma’mun. Al-Jawhari was impressed with the young man’s knowledge of Ptolemy’s work. Entering the circle of scholars under the guidance of al-Jawhari, Sanad was exposed to some of the most brilliant minds of his age in t Baghdad and the court of al-Ma’mun.

It is reported that Sanad penned a few mathematical works. Among those are al-Hisab al-Hindi, al-Jam’ wa al-tafriq, and al Jabr wa al-muqabaleh. These treatise dealt with, respectively, Indian numerals/artihmatic, addition and subtraction and algebra. Many other mathematicians of this time wrote on similar subjects, such as the highly regarded Khawarizmi (d. c. 850), who wrote three treatise nearly identical in nature and title to those of Sanad. Sanad also wrote a commentary on Book 10 of Euclid’s Elements, on irrational magnitudes. A vignette involving Sanad and the Banu Musa brothers appears in the “Uyun al-anba fi tabaqat al-atibba” of Ibn Usaybiah (d. 1270). The story, if accurate, offers insight into court politicking, but more importantly, the illustration of Sanad offered by the Abi Usaybiah is that of highly esteemed engineer called upon to fix a canal that had been constructed incorrectly – a further example of Sanad’s mathematical expertise and the respect with which he was held as an intellectual.

During the reign of al-Ma’mun, astronomical observations were supported by the caliph and thus occurred more routinely. One of the two places where observations were conducted was in an area of Baghdad known as al-Shammasiyah. Sanad carried out observations at the location with other astronomers, such as Yahya b. Abi Mansur (d. c. 830) sometime around 828 to 829. He may have even assisted in observations carried out in the second major centre of observation, Damascus,, around 831-832 and possibly as late as 841-844. It is uncertain whether he participated in astronomical excursions directed by al-Ma’mun. In the al-Zij al hukumi written b ibn Yonus (d. 1009), an Egyptian polymath, a report concerning a geodetic measurement of the earth in which Sanad participated is mentioned, though some modern scholars cast doubt on the veracity of this report. It is thought Sanad produced book of zij (astronomical tables), which would make sense given the amount of testimony on his dedication to astronomy. Given Sanad’s involvement in observations carried out at al-Shammasiya and the production of zij, scholars speculate he may have played part in the development of the well-known zij al-mumtahan, known as the “Verified Tables”, commonly ascribed to his co-observer, Yahya b. Abi Mansur, but the lack of evidence suggesting Sanad did contribute to the zij al-mumtahan leaves the question unanswered.

His name appears in works by both al-Biruni ( d. c. 1048) and al-Khazini (d. 1130) in discussions of instruments and metals. Al-Khazini, an astronomer and authority on scientific instruments, identifies Sanad as one of the scientists who developed and used a hydrostatic balance (mizan al ma’), a device to determine gravities, in order to determine compositions of metals. Al-Biruni records two additional scientific exploits attributed to Sanad,. First, in al al-Biruni’s work on coordinates, Tahdid nihayat al-amakin li tashil masafat al masakin (The Determination of the Coordinates of Positions for the Correction of Distances between Cities). It is related that Sanad, while on an expedition with al-Ma’mun, completed a measurement of the circumference of the earth. Scaling a mountain, Sanad measured the inclination from his point on the mountain to the horizon on the sea. Then applying other measurements and using geometry, Sanad determined the circumference of the earth. Second, in the al-Qu’min al-Mas’udi, al-Biruni quotes a lost work of Abu Ja’far al-Khazin (d. c. 970) stating that Sanad was one of three scientists to determine the lengths of seasons. It is unfortunate so so tille is known of Sanad’s life and that much of that knowledge is beleaguered by doubt. Biographical details, if true, point to an individual with a brilliant mind for science.

After the fall of the Baathist government in