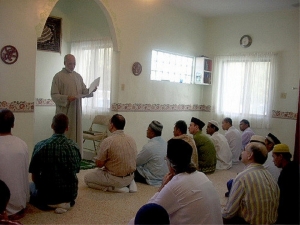 The Muslim Association of Guam was founded in 1990 to meet the needs of the growing Muslim community on Guam, although membership has varied over the years from a high of more than 100 to the current total of about fifty.

The association also serves as a unified body to provide Islamic information to the general public and has a stated goal of creating understanding and harmony between the different religions on Guam.
Muslims in the association worship at Masjid Al-Noor, the only Muslim place of worship on Guam. The centre is located near Ladera Towers in the central village of Mangilao. It was built over the period of three years, due to budgetary constraints, and was opened in 2000.
The centre offers five daily prayer services, Friday congregation prayers and sermon, Friday night classes for children, and family gatherings on alternate Sundays. The sermons are done in English with quoted verses from the Holy Qur`an in Arabic.
During special times such as Ramadan, community fast breaking and nightly prayers are offered. Members often use the centre to celebrate the two Muslim feasts (feast of Ramadan and feast of Al-Adha). The association provides religious guidance to Muslims on Guam and ceremonies in the case of funerals, marriages, divorce and other occasions.
The traditional leader of the Muslim community is the Imam, who is not elected but is the most knowledgeable person in the community who leads the prayers. The current Imam is Mohammad Asmuni Abdullah, an architect with a private practice. In his absence, the next most knowledgeable member of the community takes over his duties. Abdullah’s predecessor was Farouq Abawi, a longtime professor at the University of Guam.
Although the membership of the Muslim Association is not large; it varies largely in ethnicity and country of origin. Almost all members are U.S. citizens but originate from such countries as Afghanistan, Pakistan, India, Bangladesh, Sudan, Eritrea, Morocco, Egypt, Indonesia, Malaysia, Guam and the United States. Members consider themselves mainstream Muslims and follow the universal message of Islam.
Guam is a U.S. island territory in Micronesia, in the Western Pacific. It’s distinguished by tropical beaches, Chamorro villages and ancient latte-stone pillars. Guam’s WWII significance is on view at the War in the Pacific National Historical Park, whose sites include Asan Beach, a former battlefield. The island’s Spanish colonial heritage is evident in Fort Nuestra Señora de la Soledad, atop a bluff in Umatac.
The capital city of Guam is Hagåtña, and the most populous city is Dededo. In 2017, 162,742 people resided on Guam. Guamanians are American citizens by birth. Guam has an area of 210 sq. mi (544 km²) and a population density of 770/sq. mi (297/km²). Situated in Oceania, it is the largest and southernmost of the Mariana Islands and the largest island in Micronesia. Among its municipalities, Mongmong-Toto-Maite has the highest population density of 3,691/sq mi (1,425/km²), whereas Inarajan and Umatac have the lowest density of 119/sq mi (47/km²). The highest point is Mount Lamlam at 406 meters (1,332 ft.) above sea level.
The Chamorro’s, Guam’s indigenous people, settled the island approximately 4,000 years ago. Portuguese explorer Ferdinand Magellan, while in the service of Spain, was the first European to visit the island on March 6, 1521. Guam was colonized by Spain in 1668 with settlers, including Diego Luis de San Vitores, a Catholic missionary. Between the 16th century and the 18th century, Guam was an important stopover for the Spanish Manila Galleons. During the Spanish–American War, the United States captured Guam on June 21, 1898. Under the Treaty of Paris, Spain ceded Guam to The United States on December 10, 1898. Guam is among the seventeen Non-Self-Governing Territories of the United Nations.
Before World War II, Guam and four other territories American Samoa, Hawaii, Wake Island, and the Philippines were the only American jurisdictions in the Pacific Ocean. On December 7, 1941, hours after the attack on Pearl Harbor, Guam was captured by the Japanese, who occupied the island for two and a half years. During the occupation, Guamanians were subjected to beheadings, forced labour, rape, and torture. American forces recaptured the island on July 21, 1944; Liberation Day commemorates the victory. Since the 1960s, the economy has been supported by two industries: tourism and the United States Armed Forces.
Flyers distributed around Penrith city, Australia calling for ban on Burqa

Islamophobic flyers have been posted around the city of Penrith in New South Wales, Australia claiming to be from the local council.
The document is titled ‘Say no to the Burqa’ and in the footnotes claims to be from the Penrith City Council, providing an address and contact number.
‘For reasons of security no person with any form of facial covering should be allowed to enter or be served in Penrith,’ the flyer reads. ‘Save our values, save our laws.’
The council told Daily Mail Australia they were aware of the flyers and strongly denied any links. ‘It has come to Council’s attention that information titled ‘say no to the burqa in Penrith’ is being distributed in parts of the Penrith Local Government area giving Penrith City Council as the official contact for further information. Penrith Council did not produce or distribute this document,’ the council said in a statement.
‘Any person who makes a document on the authority of Council when in fact Council did not authorise the making of it may be guilty of a criminal offence. Any person identified as doing so will be brought to the attention of the Police.’
The post on a Penrith community page has been reacted to over 200 times with nearly 100 comments. Reactions have been mixed, with many saying the ban would only increase racial tension.
‘Banning Burqas in any other country has never stopped anyone from committing a crime,’ a Facebook user said. ‘What rule are they breaking?’ another said.
Some believed banning Islamic clothing was too extreme, rather saying they should remove head coverings when required.
‘I don’t see a problem with the Burqa in any shape or form, but I do believe they need to show their faces for law enforcement or identification,’ one person commented.

IOFS celebrates its day, reviews achievements of “Year of Africa” 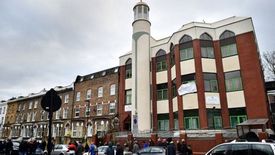