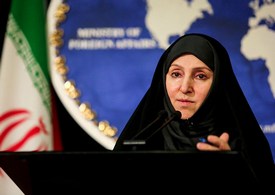 complicated” stage, Spokeswoman of Foreign Ministry Marziyeh Afkham said on Wednesday.
She made the remarks while speaking to reporters at her last weekly press conference in the current Iranian calendar year which ends on March 20.
Her comments came after Chairman of the Atomic Energy Organization of Iran Ali Akbar Salehi who is in Lausanne, Switzerland said that Tehran and the Washington have resolved their differences over 90 percent of the issues in the talks on Iran’s peaceful nuclear program.
“We have reached mutual understanding on a majority of issues [in the negotiations], there just remains a single sticking point, which is very important,” Salehi told IRIB News on Tuesday.
According to Afkham several rounds of intensive and sensitive talks have been held by Salehi and US Energy Sectretary Ernest Moniz.
She added that similar negotiations were also been held between Foreign Minister Mohammad Javad Zarif and the US secretary of state.
The talks will continue on Wednesday, Afkham added stressing that both sides are trying to shorten the existing distance between viewpoints of the negotiating parties.
Stressing that improvements have been made from technical aspects of the talks, she said, however, discussions on political issues will continue.
The talks between the US and Iran are part of broader negotiations between Tehran and the P5+1 Group of world powers, namely Russia, China, the US, the UK, France and Germany, to reach a comprehensive agreement on Tehran’s nuclear program as a deadline slated for July 1 draws closer.
Before attending talks in Lausanne, Salehi held two rounds of negotiations with Moniz in Geneva and Montreux.
The former Iranian foreign minister was added to the team of negotiators in recent talks in order to discuss the technical issues between the two sides and help settle them.