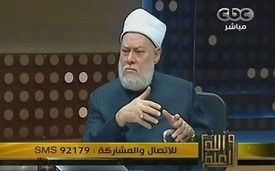 Egyptian Mufti’s ridiculous fatwa which is according to a bukhari hadith.

Some Salafi muftis say Islam allows adult men to be breastfed by women and they quote some hadith to this effect.
It is interpreted that the milk he drank was from a cup and not from her breast .
Back in May 2007, Dr. Izzat Atiya, head of Al Azhar University’s Department of Hadith, issued a fatwa, or Islamic legal decree, saying that female workers should “breastfeed” their male co-workers in order to work in each other’s company.
For instance, three years later in 2010, a high-ranking Saudi, Sheikh Abdul Mohsin al-Abaican issued a fatwa confirming that “women could give their milk to men to establish a degree of maternal relations and get around a strict religious ban on mixing between unrelated men and women.”

Asian women in US financial sector challenged over their race